Get To Know Cast Iron A Little Better

What we know today as cast-iron is a form or type of iron. Iron can be found in numerous applications all over the world. It is commonly utilized in everyday life and encompasses a wide range of uses from weapons of war to farming implements – and everything in between. Applications for iron were seen as early as 1200 BC and, later on, a critical profession working with iron became known as blacksmithing. Blacksmiths would form the iron into tools and other implements, changing its shape and properties.

The Iron Age – when the value of iron was discovered – cemented its dominance in military and social applications. The way that metals were worked into products and produced, including iron, changed drastically during yet another iron milestone – the Industrial Revolution.

Let’s get to know iron just a little bit better. For starters, there are two different types: cast-iron and wrought iron.

When you take iron-carbon alloys having a greater carbon content than 2%, and smelt them, cast iron is produced. This metal is poured into a mold after smelting. The difference between wrought iron and this type of iron is that this is not worked with tools and hammers. Composition is another difference. The casting performance of the molten metal is improved because of the difference in composition. Silicon, carbon, various other alloys – and possibly manganese, phosphorus, and sulfur in small amounts – may all be found in cast iron. Finally, physical properties and chemical structure differ between cast iron and wrought iron.

There are significant differences between cast iron and steel, though they may appear similar. Cast iron’s supreme “castability” is a result of the presence of silicon and its high carbon content.

Different processing techniques and heat treatments can be used to produce various types of cast-iron, which include the following:

Where cast-iron is concerned, here are a number of common desirable mechanical properties:

As mentioned earlier, blacksmiths worked with iron, and the first type of iron worked by and produced by blacksmiths was wrought iron. Before being worked (or wrought) on an anvil with a hammer, it is heated in a furnace as a virtually pure element (Fe). Most of the material’s slag is expelled by hammering the iron. Hammering also welds together the iron particles.

A new use for wrought iron was discovered during the Industrial Revolution. Because of its resistance to breakage under tension (high tensile strength), it was perfect for use in construction projects on a large scale – i.e., high-rise buildings and bridges. In the early 20th century, however, this use of wrought iron was pretty much abandoned. The reason: steel products. In the construction applications in which wrought-iron had been used, superior performance was exhibited by steel.

A&A Coatings protects iron against corrosion, erosion, and other elements related to wear and destruction with today’s protective coatings. We thermal spray any number of coating types in order to rebuild parts, protect surfaces, resurface, and more. Contact us today to find out we can be of assistance to your business or industry. 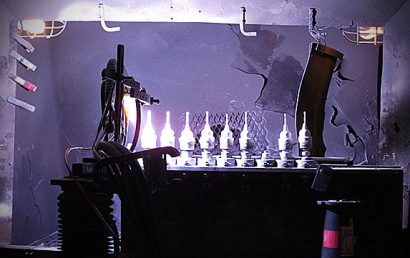 Why Use Titanium For Your Coatings?
Read More

Understanding Abrasive Wear And How To Reduce It